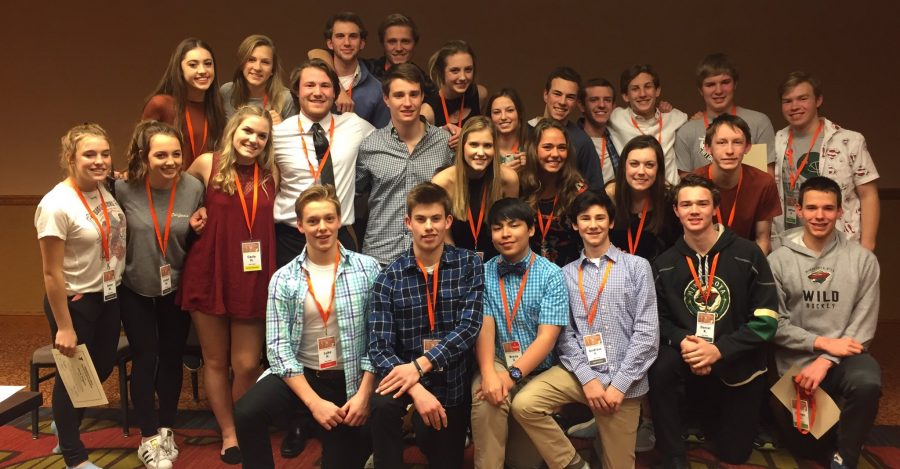 The Holy Family YIG Delegation of 2017

Model Assembly is one of Holy Family’s shortest but most unique extra-curricular activities. Every January, for an extended weekend of four days, it summons 1,600 students from across Minnesota to the Hilton Hotel in Minneapolis to form an intricate simulation of state government.

Participants can serve as legislators, judges, attorneys, lobbyists, cabinet members, media representatives, or introductory leadership corps members. Most students take the opportunity to make daily commutes to the Capitol in St. Paul to take on these roles and sit in the chairs of real political officials.

This year was one of Holy Family’s most successful in the program. Students participated in the House of Representatives and the Senate, debating bills and passing some in the two chambers of state legislation. Others had the opportunity to act as both lawyers and justices in cases for the Supreme Court and Court of Appeals. Finally, several students debated bills that reached more broadly in the National Issues Forum. All these great programs were located at the Capitol (some even required walks through underground tunnels to get to the correct building).

While many students did well in their court cases, victory was more apparent in the legislature, where a Holy Family record of five student-made bills passed into law. For a bill to be “passed” it must receive a majority vote in a legislative committee, in the House, in the Senate, and then be signed into law by the governor (who in this case is a fellow student elected from last year to preside over the government this year).

If rejected in any of those areas, the bill will fail. This is why it’s such a difficult task to pass one. Some students had great bills that the legislature didn’t even get time to discuss, since there were only three days to discuss them all and every representative or senator makes one.

What’s truly amazing is the graciousness the state government has shown in allowing young students to make a large-scale simulation within the Capitol building. Only four other states actually allow Youth in Government (YIG) students to have this great privilege. Furthermore, the Minnesota Capitol building has been in construction for 3 yrs, and renovations were completed for the real state officials for just two days before they were asked to recess so a bunch of students could use it for a four day weekend.

As a result of the large sum of money spent on the renovations, the Capitol looks amazing. While YIG participated in activities throughout the building, crowds of excited citizens took tours and photographs. Colin Dosedel, a sophomore who participated in Court of Appeals, said that his first YIG experience was “A great way to learn more about how the government works,” and that ” being inside the Capitol was the coolest part.”

When asked why she keeps coming back to run it, she said, “I recognize the importance for students to understand their civic duty as Americans. In this program, they are actively involved in how our government works, whether it be courts or legislature. Understanding parliamentary rules and the voices of peers, researching current issues, putting the facts before personal opinion in court cases… there are just so many life skills that you’re exposed to. Since adolescents rarely have much of a voice in politics, seeing them sit in the chairs of today’s representatives reminds me that they will be the generation who take them up in the future. The idea of kids civically participating is so important, because they are the future of America.”

While Holy Family students may come to YIG from different grade levels, they all naturally come together to support each other in Model Assembly, learning how to be citizens that will dictate society’s future.