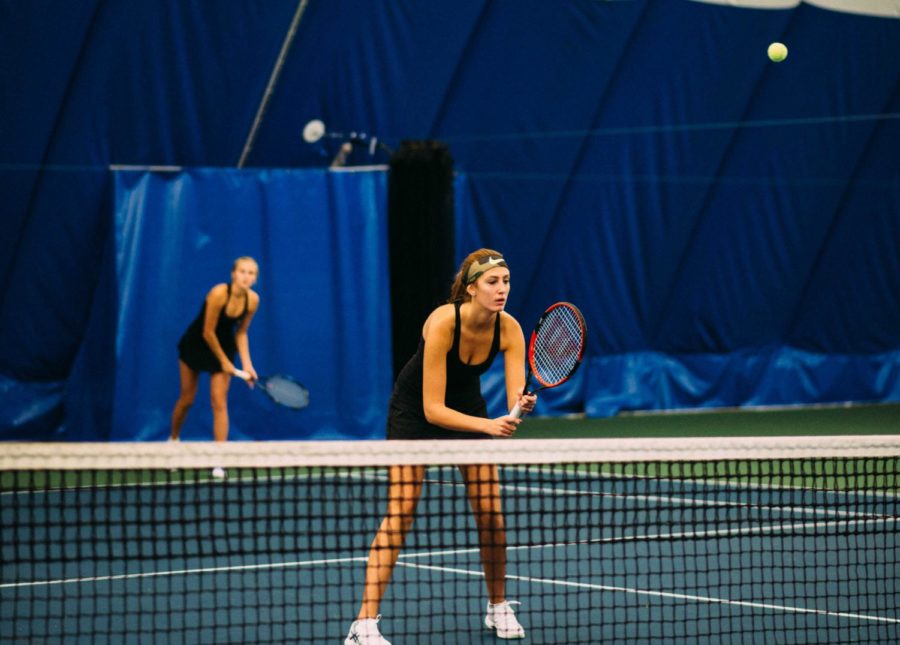 Heading into the team state tournament, the girls were blessed with a good seed, playing Virginia first round. They were able to beat Virginia 4-3; second singles, first doubles, second doubles, and third doubles were all able to defeat their opponents.

The team moved onto the semi-finals where they played Osakis to make it to the championship match. They defeated Osakis 4-3 with first singles, second singles, first doubles, and second doubles all winning their matches. At this point in the tournament, the ladies were ecstatic because they had reached their goal to be playing for the first spot in state. Unfortunately, the team played Blake in the finals and lost 0-7.

Senior Co-Captain Sophie Lynch commented on the team’s performance, saying: “I am insanely proud of the amount of time and effort that all of the girls put in for us to make it to the state tournament. The energy that the team brought to the matches both on and off the court allowed us to make it to the championship match! All of the girls should be extremely proud of their accomplishments this season!”

By the time all was said and done, she took fourth overall in the state. This was a huge accomplishment for Ally, taking into consideration that she still has three more years of high school tennis ahead of her. Ally recognized that she played well throughout the week, commenting: “After our team finished in second place it took a lot of the pressure off of me individually and I was able to play my best tennis.”

Overall, the Girl’s Tennis Team had an unbelievable season and Co-Captain Lindsey Harris put it well when she said, “It’s so crazy to think how successful this program has been in the past four years! Despite every achievement this team has made, this one means the most to me because it was the most unexpected and hard fought. I have never been so proud of the team, so many girls had to step up and play varsity this year. They were the difference, they were the reason we made it as far as we did.”

Looking into the 2018 season, many strong returning players, like Ally Agerland and Maggie Berg will lead the team to what they hope is another state appearance.