Opinion: I got my nose pierced, I still have the same goals and values 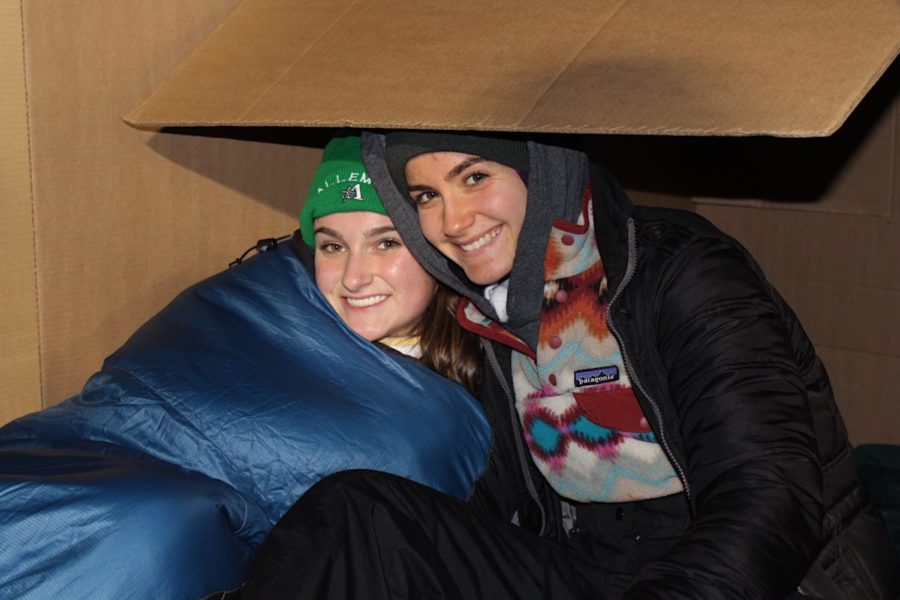 “Visible tattoos and piercings (other than in ears) are not acceptable. Students having tattoos or unacceptable piercings must cover them with the proper school uniform on regular dress days and appropriate dress on Spirit Days. They must also be covered appropriately when wearing any athletic uniform or outfit that is worn to represent Holy Family Catholic High School.”

Two weeks ago, I got my nose pierced. I have the same goals in life, and I am still the same girl I was previous to having a piece of jewelry on my nose. Something so simple as a nose piercing does not change who I am and what I am capable of.

There are things in life that matter: working to achieve your goals, how you positively impact the world, and being the best version of yourself. I think we can agree that each of these objectives are essential towards our personal development.

Notice how they are solely concentrated on our inner qualities, not about the appearance we choose. I believe appearances are sought to be controlled because in most instances, a person’s actions cannot be. This sense of control provides comfort. Maybe if everyone appears the same, they are all forming the same intellectual beliefs.

The phrase that adults have stressed throughout our entire youth is: “Don’t worry about appearances, what matters is what is inside of you.”

So why is this not actually applied when a person decides to dye their hair pink, get a nose piercing, or have a tattoo? The truth is that it is always easier to say you support physical change when it is not your own kid or student.

I find it interesting that a jewel on my nose has developed negativity in relation to my education. When I’m told that I must either cover the piercing with a bandaid or take it out, it is as though I’m supposed to feel guilt in committing a crime against an identity I’m meant to advertise.

It is challenging enough as a teenager to find one’s identity amidst so many people who have their own visions of who we should be. It is not realistic or appropriate for educators to also expect a particular identity from us just because it conflicts with what they envision for the appearance of his or her students.

It was difficult for me to hear that our school policy abides so closely to past generational norms. However, after getting so many compliments from friends, students and teachers, I realized that there is a difference in perception between generations. 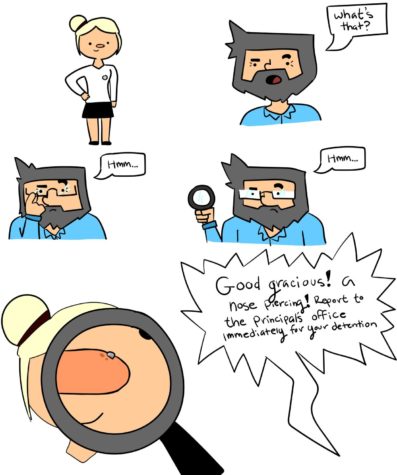 Facial piercings, tattoos, and hair coloring have become more common in the modern day. For older generations, these practices were seldom seen or accepted. Many adults simply assume these actions are a rebellion against authority.

Understanding that they lived in a society governed by a stricter appearance guideline, they must also acknowledge that cultural norms are constantly evolving. By raising us as a generation that challenges injustice in society and seeks equality, they cannot condemn us for questioning what they have already accepted. I have learned from my high school education that there can be no change without an individual who stands against the majority.

Unfortunately, when a student decides to push against a rule she believes to be unnecessary to her education, she is reprimanded. It is easier to instill the concept of speaking out within our student body than for those who promote it to acknowledge their hypocrisy.

One male teacher at Holy Family had visible piercings through his shirt. Other teachers have had visible tattoos. How can our community expect students to abide by a code that even the staff doesn’t follow?

It is also interesting to note that people (teenagers included) like to make exceptions to the extent of what they accept. I have heard plenty of kids and parents say, “at least it’s not an eyebrow piercing,” “it’s not a hoop, it’s only a stud,” or “at least it’s not a tattoo.” We are so dependent upon past norms that we can only adjust slightly, fearing the extreme. Once we establish that appearance is nothing compared to the inner qualities of a person, then we must acknowledge how cultural norms have allowed us to use what we believe is unattractive as a shield to hide our prejudice.

The Church hasn’t banned ear piercing and the Bible offers no restriction regarding the wearing of earrings and nose rings. The closest reference says, “You shall not make any cuts on your body for the dead or tattoo yourselves: I am the Lord” (Leviticus 19:28).

According to theologians and biblical commentators, this law is not part of the unchanging moral law, but an instance of ritual law specific to the Hebrew Bible. At the time, the law prohibiting tattoos was a specific attempt to prevent idolatrous Canaanite worship.

So what does it say about us, if we follow our preconceived notions about appearance so closely that we fail to understand that foundation those truths are built upon? Tattoos, hair dye, and piercings do not take away the beauty of a person. Subjectively, especially in older generations, some people find it less appealing, but that is an opinion that cannot and should not be forced upon the others.