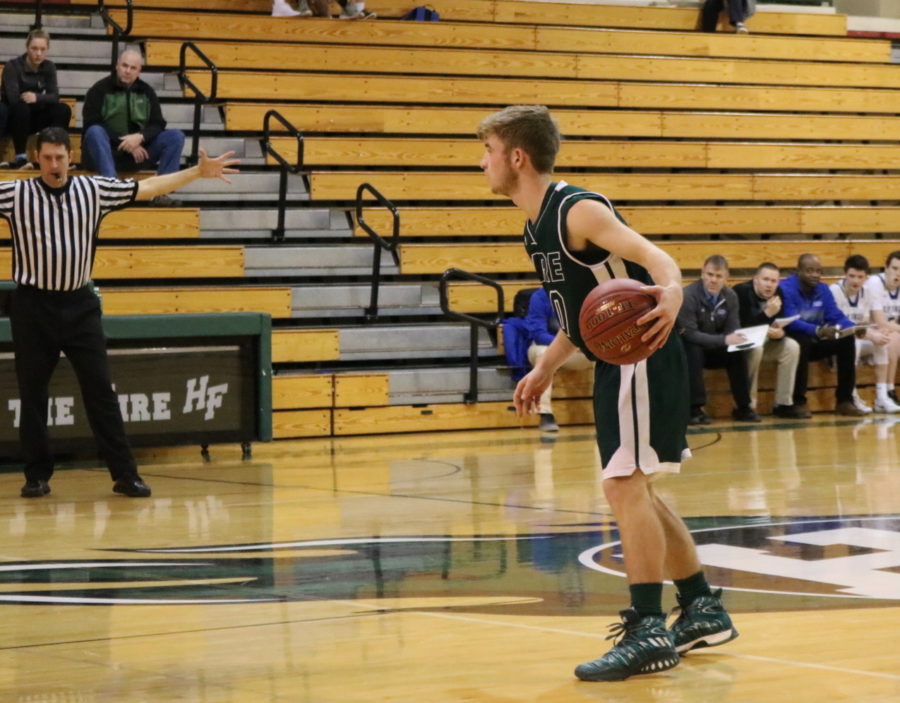 On Saturday, the boys basketball team faced off against the Breck Mustangs in their season opener. The game showcased the team’s individual and collective potential with a 71-64 victory. For the first game of the season, their win shows great promise and will undoubtedly build excitement for the upcoming season.

While the game ended well, it didn’t start off perfectly. In the first half, the team struggled to sink their shots. Their offensive execution was hampered due to Breck’s aggressive defense. The Mustangs showed they were a competitive opponent, leading the Fire 28-32 at the half.

Tensions rose at one point when a player from Breck got called for a technical foul after chucking a basketball at senior captain Lincoln Cizek.

After the game, Cizek discussed their competitive nature, “They were tough. That guy who put me in a headlock was passionate. They were all very aggressive and hard-working. I pushed off and was lucky to not get a double technical called on me, thank God. Thuli would’ve killed me.”

In the second half, the Fire knew they had to capitalize on their opportunities down low. Senior Nathan Hendler led the team with 11 rebounds. Offensively, the boys had to improve on supporting each other in the process. As a team, they collected a total of 16 assists. Once they familiarized themselves with Breck’s defensive style, they took control and collected a total of 33pts off turnovers, second chance attempts, and fastbreaks.

The leading scorers for the game were Nathan Hendler with 20pts, Lincoln Cizek with 14pts, and Griffin Johnson and Kevin Schepers each with 12pts.

Senior captain Nathan Hendler elaborated on the team’s performance: “I think we played ok. We’re still trying to figure out our team’s rotation. All in all I think we’ve got a good team this year – there were a lot of pregame jitters. It’s just the first game of the season.”

Thuli had quite a bit to say about the team’s efforts: “For our first game, it was OK. We need to work on transition defense, rebounding, limiting one shots, turnovers, knocking down open shots, running a good offense, setting screens. Pretty much everything.”

He continued by reinstating that this wasn’t a game of revenge, “It was good for us because they were in our section. Since it was our first game, I wouldn’t consider it revenge. But when it comes to sections, I think that would be the time to play for a revenge game. It feels good and we gotta just keep working hard as a team.”

The boy’s next game is at home tonight, December 5 at 7:00pm against Watertown.