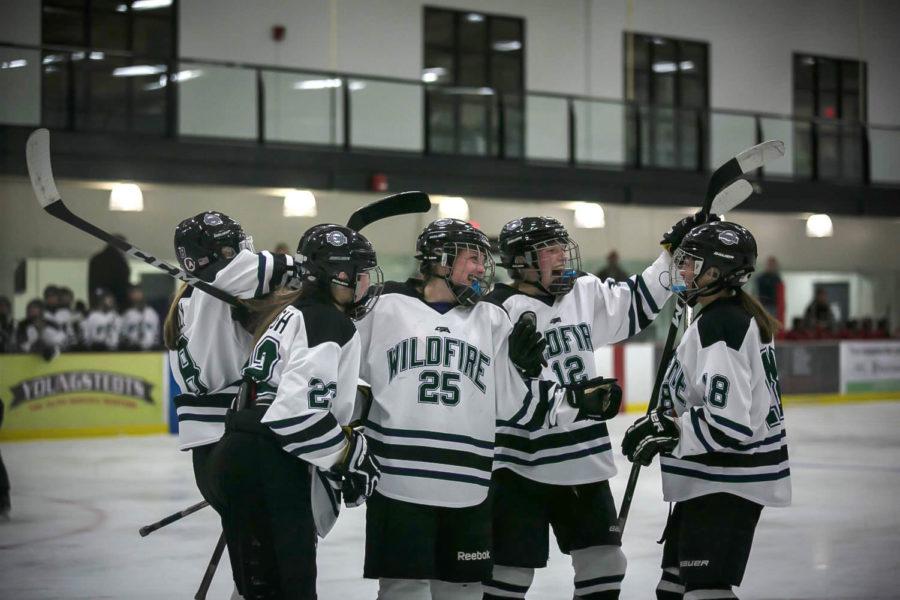 The girls demonstrated incredible chemistry as a team, but there were certainly individual standouts on the night. Freshman goalie Alex Pellici tallied 28 saves, earning her first shutout of the season. Sophomores Lauren Hickey and Mallory Vacek each contributed two goals and an assist, while Sadie Long and Sydney Paulsen also added a goal and an assist each.

Assists were also contributed by Molly Garin (3) and Bridget Orr (2).

The girls struggled to take advantage of their opportunities in the first period, scoring one goal on 12 shots, but broke through during the second, scoring 5 goals on 9 shots. The Wildfire kept the pressure on during the third period, peppering Orono goalie Eden Schultz with another 13 shots.

The start of the Wildfire’s season has been nothing short of impressive. Just 11 games into the season, the girls have tallied an 8-3-0 record, granting them a considerable lead in the battle for a conference championship.

A great contributing factor to the success of the Wildfire is senior captain Molly Garin. This season, Molly has tallied 29 points, netting 18 goals and assisting 11.

She leads the team in all three categories, making up the majority of the team’s offensive power. Not only does Molly shine during games, but off the ice as well. Younger teammates credit her  kindness and inclusiveness as essential to the team.

Sophomore Caitlin Rock emphasizes that Molly puts forth “great efforts to form bonds with underclassmen and make us feel welcome. She improves our team spirit, and it shows dramatically on the ice.”

Molly exhibits all qualities of a team player while also shining in her individual contributions. She recently netted her 100th point for the Wildfire, and plans to drive the team to a successful rest of the season.

Aside from Molly’s superb leadership, many other individuals contribute to the team’s success.

Sophomore Lauren Hickey is just behind Molly on the stat sheet with 17 points, coming from 8 goals and 9 assists.

There are many valuable newcomers this season as well, including Sydney Paulsen, Bridget Orr, Taylor Koeppl, and Maeve Kelly. Together, they’ve collected 28 points over the course of the season and have become major assets to the team.

Additionally, new goaltender Alex Pellicci is averaging just 1.68 goals a game and has achieved an impressive .944 save percentage.

The combination of new players and the strength of the veterans gives players and fans alike hope for improvement on the Wildfire’s already successful season and for a first-time trip to the state tournament.

This week, the girls hope to extend their 4-game winning streak against two tough opponents. They face Hopkins at 7:00 on Tuesday, December 19 at Victoria Ice Arena and compete at 2:30 on Friday, December 22 at Benilde-St. Margaret’s.