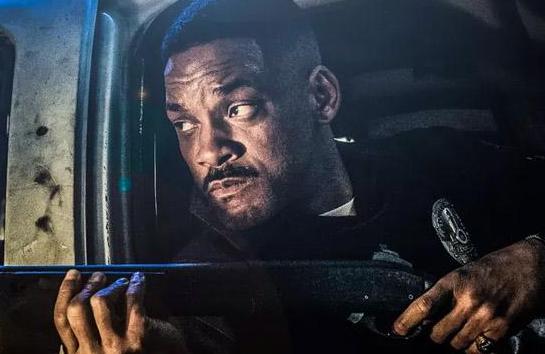 Bright is the newest original movie from Netflix. Written by Max Landis (Chronicle) Bright takes place in an alternate future where humans, elves, and orcs all live together in society.

The film mixes elements of The Lord of the Rings and End of Watch, and if that sounds like a recipe for disaster, it is. The movie is a poorly-executed fantasy with subpar acting, writing, action and social commentary.

Bright fails on almost every level, and most of this can be attributed to the poor script and writing. The dialogue in Bright is truly horrible. The characters frequently spout jarring, uninteresting exposition. Much of the dialogue is cringeworthy and delivered by a bored looking Will Smith.

Due to the poor writing, the characters and performances in Bright were also very bad. Will Smith proves in that he is great at playing Will Smith. Joel Edgerton (It Comes at Night) plays Jakoby, a marginalized orc cop. Edgerton does his best, but his character is annoying and has laughably bad dialogue.

Not only does Bright have copious amounts of bad dialogue, it is chalk full of laughably bad action sequences. Ayer and company poorly block and film the sequences. The editors don’t do the action any favors as well, rapidly editing each sequence until it is hard to tell what is happening. The action is ridiculous music choices and computer-generated blood squibs.

Bright is a very bad, predictable movie and a waste of time. This movie is free to watch on Netflix but I still felt robbed.