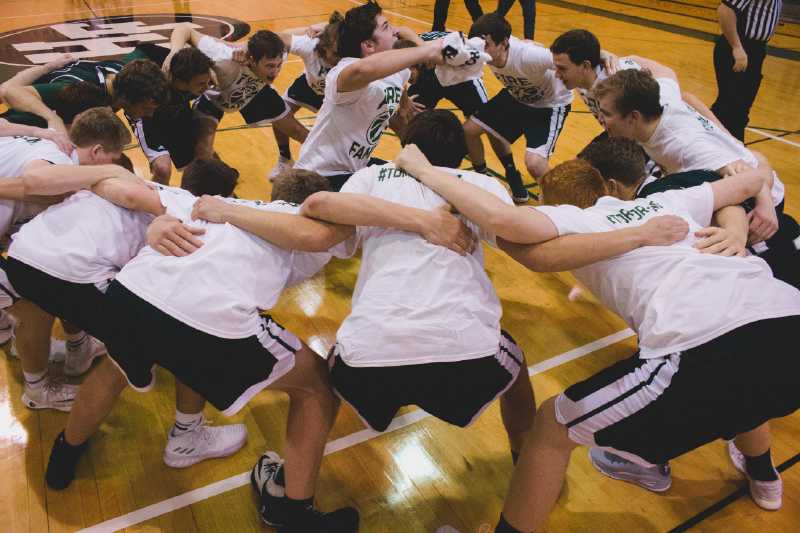 Last Friday, boys basketball faced off against the Orono Spartans in one of the hardest matchups of the season. Hoping they could use their newfound motivation from last week’s impressive performance against Jordan, the team put their best foot forward. In a “close, but yet so far” fight against the Spartans, the boys, fell to their rival 54-67.

The first half could be characterized as a slow-moving battle between the two teams. It wasn’t until a couple minutes into the game when the Spartans were able to go on a 0-9 run, forcing the Fire to call a timeout to stop their momentum. Captain Lincoln Cizek said, “Our emotions got to us and when we got down 0-9 right away, we kinda hid in our own shell.”

One big factor in the Spartan’s success was Jarvis Omersa, a newly committed University of Minnesota recruit. His height and performance in the paint gave the Spartans an advantage not only offensively, but defensively as well.

Later in the first half, Senior Kevin Schepers was able to lock Jarvis down and drew three consecutive fouls, forcing him to sit on the bench for key moments of the game.

Kevin elaborated on the team’s tenacious defense, “My teammates and I were working our [butts] off trying to beat him down the court. You can’t really push someone like that around so you gotta play smart and conservatively. I felt like it was just a reward for good defense to get those quick fouls on him.”

Coach Matt Thuli added, “I don’t think he hurt us as much offensively, but he definitely caused some problems on our defensive end. We had to give him a lot of attention when he was down in the post, so that’s where I think he affected the game the most.”

As the first half winded down, the Spartans pulled ahead and were able to get a last-second 40-foot tossup to put the Spartans ahead 17-33 at the half.

Coach Thuli talked about the team’s first-half performance, “Our shots weren’t dropping, but I felt like we were rushing a little bit. We could’ve made a few more passes, could’ve got the same shot – maybe a better and more open shot. We turned the ball over a lot in the first half which is unlike us.”

The Fire came out in the second half with a sense of motivation, but not enough to carry them over Orono. The Spartans showcased their abilities around the arc with 7 three-pointers and in the paint with 40 rebounds, nearly doubling Holy Family’s 21.

Coach Thuli elaborated on how the team adjusted, “We tried running a couple of different offenses where there was a little less ball screening and more cutting and driving opportunities for us, and we also did that more in the second half. They were quick and strong and definitely ran us off our cuts.”

It was a hard-fought battle between the two teams until the Spartans claimed a 15-point lead with 5 minutes left to go in the second.

Giving it their best effort, the Fire were unable to mount a comeback and lost 54-67. The team is now 12-3 after taking their first loss in the last 11 games.

Leading scorers for the Fire were captains Lincoln Cizek with 16 points, Nathan Hendler with 11 points, and Griffin Johnson with 8 points. For the Spartans, Jarvis Omersa led the team with 21 points and 11 rebounds, and Max Bjorklund (15 points) and Colton Codute (13 points) combined for 11 rebounds and 11 assists.

After tonight’s performance, what are some aspects of the game that you guys need to improve upon?

“We proved in the second half we could play with them, so we should’ve just played like that the whole game and we would’ve been set. We can’t be careless and turn the ball over. We kinda kicked ourselves after having numerous, consecutive turnovers at the beginning of the first half. Third, we just gotta play as a team. If we play like a team, we’ll be pretty [darn] good.” – Captain Lincoln Cizek

What are your overall opinions on the game?

“It’s the best team we’ve played all year – we just couldn’t really handle it. First half we couldn’t figure it out. When the second half came, we knew that we could handle it. Next game.” – Captain Nathan Hendler

What are your thoughts on the game? What needs to change?

“I was pleased with the second half effort and the way we competed. We just gotta go off of that and get back to playing a little bit more like we have been the previous games. We need to come out and do the things that have been generating success for us: running our offense crisply, making extra passes, sharing the ball, and getting up and pressuring a little bit more defensively.” – Coach Thuli

Although the Fire lost, last Friday was a very important night for the Holy Family community. After a 20-month struggle with osteo-sarcoma, Holy Family parent Scott Torborg, father of senior Aaron Torborg and sophomore David Torborg, passed away on January 16 at the age of 49.

In remembrance of Scott, senior Emmett Curran designed “Torborg Strong” t-shirts that were sold in the commons during the game and worn during warm-ups. A moment of silence was also held for those who were affected, remembering Scott’s deep love for the school community and for basketball.

At the end of the game, we asked Aaron Torborg about the “family” element and how important that is to him and his family. He said, “The family feeling we have really helps us because we keep playing together through the high moments and the low ones. The support from the Holy Family community is really special because you truly know how close everyone is to each other – and for that we are all thankful.”

The boys play again on Tuesday, January 23 at Delano High School at 7pm.