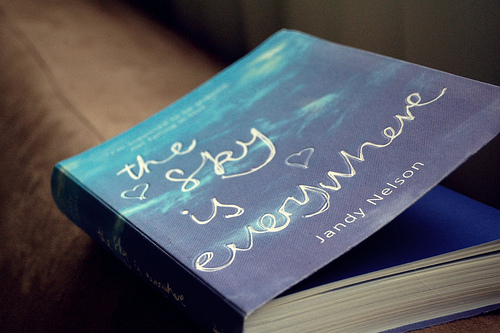 The Sky is Everywhere, by Jandy Nelson, follows Lennie, a hilarious, romantic, and emotional girl, as she accepts the loss of her sister.

Lennie finds herself finding comfort from both Toby, her sister Bailey’s boyfriend, and from the new kid in town, Joe, who has an aura of French romance about him.

Lennie finds herself drawn to Joe for their similar love of music and his natural charm, but can’t seem to stop running into Toby, who shares her grief  and desire for her sister to somehow come back to life. Lennie finds herself lost in two worlds and desperate to keep the two worlds separate because she knows if she lets them collide, her life may just implode.

Though the writing of this novel was poetic and engaging, capturing readers from the first few pages, the book isn’t entirely original. It’s similar to Nelson’s other work I’ll Give You the Sun in the sense that both follow twins, the loss of one of the twins and a spiraling romance that comes of it.

The book also does not shy away from basic literary cliches, such as romance that seems to evolve overnight and the ever-present “will they, won’t they” of a love triangle.

Fortunately, the writing becomes more interesting as almost each chapter begins with a poem or piece of writing that has been scattered through the town Lennie lives in. Found on various objects, such as candy wrappers or paper cups, Lennie writes of loss and her pain from Bailey’s departure.

Throughout the story, these small details seem superfluous, but we come to learn that one of Lennie’s friends has been collecting them throughout the town, learning more about Lennie’s past and understanding her grief and actions more clearly.

The Sky is Everywhere was nominated for a lot of awards and ended up being a Boston Globe-Horn Book Award recipient. Nelson’s second novel I’ll Give You the Sun ended up claiming the Printz Award, as well as winning several more awards for its place as a young adult novel. Each book has recently been optioned for a film version.

The Sky is Everywhere is a fast-paced novel that will keep readers engaged until its final poem.