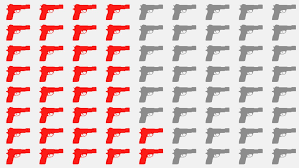 More Americans have died as a result of gun violence since 1968 than in all the wars in US history. 1

The Gun Violence Archive, which defines a mass shooting as four or more people shot in one incident (not including the shooter), reports more than 14,000 people killed and over 29,000 injured in 2017. These incidents occurred in cities, rural communities and suburbs in almost every state. 3

Americans own half of the civilian-owned guns worldwide, but make up about 4 percent of its population. 4

Gun homicide rates are 25 times higher than in the next 22 ‘developed’ countries. 5

Over the years, gun violence has been a divisive topic for many Americans. After the shooting at Douglas High School in Florida, students initiated a long awaited conversation. As we turn on the news and feel unnerved after hearing of another deadly shooting, or as we practice barricading classrooms and defending ourselves against shooters, we must ask ourselves if there are really two sides to this argument.

According to Pew Research, there are an estimate of 270 million to 310 million guns in the United States – close to one firearm for every man, woman, and child.

Gun control has become a prominent issue in politics, but how much has really changed? Last year, President Trump repealed a post Sandy Hook bill that would stop certain mentally ill people from buying firearms. President Obama also called for the CDC (Centers for Disease Control and Prevention), to research gun control and reasons behind the increase of mass shootings. The CDC refuses to research the issue, largely because of the NRA’s millions of dollars sponsoring members of congress.

After a study in 1993 by Arthur Kellermann, revealing the link that guns are associated with an increased risk of homicide in a home, the Dickey Amendment was put into place. The Dickey Amendment does not prohibit gun research but it does forbid advocacy. Although gun research is not prohibited, Congress did lower the CDC’s budget by 2.6 million dollars, almost the exact amount the CDC would need to carry out gun-related research.

It is extremely disheartening to see money taken away from research that would no doubt astonish many Americans and prove beneficial for the general safety of all. Five days after the Stoneman Douglas school shooting that left 17 dead, the Florida House of Representatives voted against a motion to discuss a bill that would ban the sale of assault guns. Survivors cried in the viewing area above, as they watching their lawmakers and supposed “representatives” vote against even discussing one of the most pressing problems in the country today.

An AR-15 rifle was used in the recent Florida shooting, the Texas church shooting, the Las Vegas concert shooting, Orlando nightclub shooting and Sandy Hook.  How does one defend the argument “it isn’t the guns it’s the people”, when multiple people had access to the same gun to murder an immense amount of innocent lives?

The LA times remarks, “the notion that a good guy with a gun will stop a bad guy with a gun is a romanticized vision of the nature of violent crime. And that the sea of guns in which we live causes exponentially more danger and harm then good. It is long past time to start emphasizing the “well regulated” phrase in the second amendment.”

As Emma Gonzalez, a student at Parkland, stated, “He wouldn’t have harmed that many people with a knife.”

According to Giffords Law Center, Federal Law states that an unlicensed person may sell, deliver, or otherwise transfer a long gun or long gun ammunition to a person of any age. In Alaska, a 16 year-old can own a gun without parental consent.

The drinking age is 21 years old.

We live in a world where innocent lives are threatened by gun violence, and we increase our security at public events in attempt combat this danger. As youth have recently reminded us, this is not enough. The accessibility of guns and promotion of their recreational use puts everyone at risk.

At Holy Family, we actively promote the use of recreational guns through a gun club and trap team. As a community, we should question why we encourage the use of these weapons. Additionally, we must evaluate our reasoning in promoting a young person’s access to guns.

It is now time to think of those who are negatively affected by the accessibility of guns. We must restrain from becoming defensive and recognize that guns are at the source of this senseless violence. If we do not, then we submit to the passivity of watching another mass shooting added to the already horrifying list.

As the youth of America, we are the catalysts of this movement. Thousands of students across the country are walking out of schools, demanding change, contacting their local government representatives, and fighting for a long awaited discussion of the Second Amendment. On April 20th, students across the country will walk out at 10 a.m. in remembrance of the 13 people who were killed in the Columbine High School massacre 19 years ago.

As a young student points out, “The Second Amendment was written in the same convention where they decided slaves were only 3/5ths of a human being so maybe it’s worth reexamining.” It is time to reevaluate the role guns play in American society.