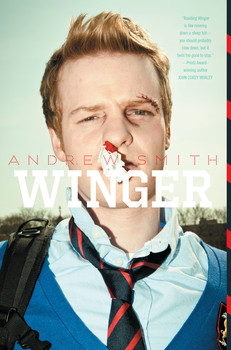 Written from the humorous and tragic mind of a teenage boy, Winger is the tale of surviving high school and all the obstacles that come with it.

Ryan Dean West is starting his junior year at a boarding school full of rich, privileged kids and unfortunately he has the disadvantage by being the youngest there, at the age of fourteen. Ryan plays wing for the rugby team, hence his nickname Winger, but has a rule breaking streak and finds himself in the dormitory hall known for trouble makers. To top it off, West ends up being roommates with the school’s biggest bully.

Ryan just would like to get through the school year soundly but he has other problems consuming his time… like being in love with his best friend. Ryan has a mad crush on his best friend Annie who unfortunately only sees Ryan as a charming, cute little brother.

What starts out as a lighthearted tale about a boy and his struggles of school, the book takes a twist that leaves readers flipping the pages just to see how it ends.

Smith writes of a wonderfully realistic main character who is flawed and a typical, troubled teenage boy. Ryan may seem like a sex-crazed, trouble maker at first but readers soon learn that he has a good heart and really is just trying to live his life to the fullest while at school. Smith includes a heartbreaking depiction of first love and what it’s really like to deal with a crush at a young age, especially when the girl you’re crushing on happens to be a little bit older than you.

Winger was nominated for many literary awards in 2014 including the Amelia Elizabeth Walden Award and The Inky Awards for Silver Inky. This novel also has a sequel, Stand Off.

Compared to John Green’s Looking for Alaska, Winger may be the next comedy, contemporary novel you’re looking for.