Movie Review: ‘First Man’ ‘The Old Man and The Gun’ and more 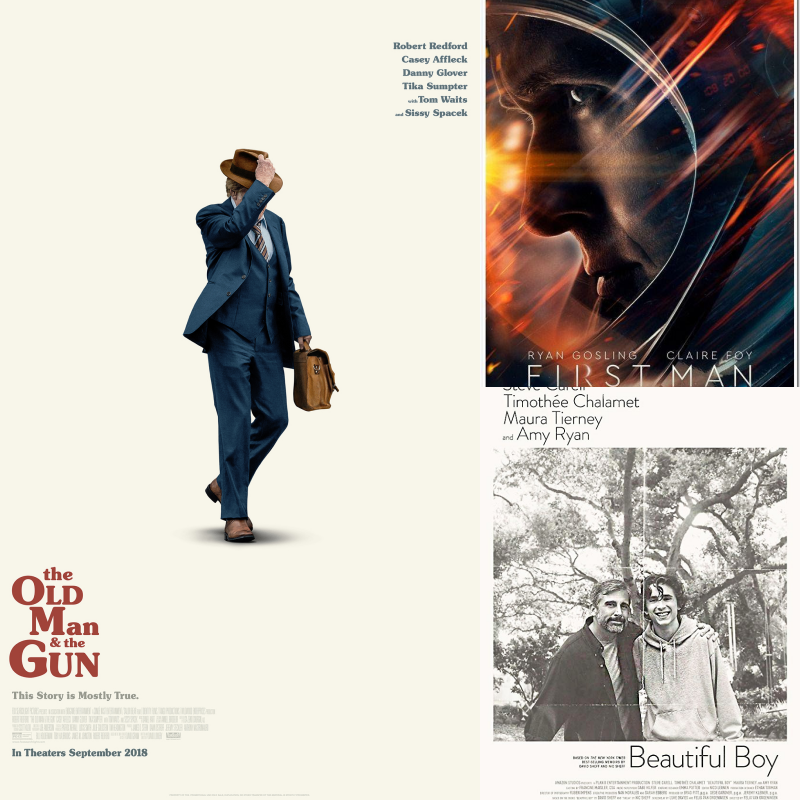 October 12 was another fantastic weekend for movies here are my thoughts on some that released.
First Man
First Man is the newest film to tell the story Neil Armstrong, the space race, and moon landing on July 20th, 1969. The film opens in 1961; after a tense and disorienting flight by Neil Armstong, the audience is given a glimpse into his home life.

First Man comes courtesy of Damien Chazelle; a 33-year-old director who’s already directed 2 masterpieces (Whiplash and La La Land). First Man sees Chazelle stepping out of his comfort zone in multiple ways; it’s his first film to not be music driven and its the first time he directing someone else’s script. Spotlight writer Josh Singer is responsible for the script and the finished product is a fascinating character study of Neil Armstrong and an accurate depiction the space program.

Chazelle has always shown skill from a directorial standpoint, but with First Man, he solidifies his directorial prowess. The visuals are masterful. Each shot is beautifully composed and captured with beautiful 16mm film. At least until the moon sequence where Chazelle transitions to 65 mm IMAX cameras. This choice made the moon sequences even more jaw-dropping, and the seamless visual effects only aid in the experience. The practical sets and cockpits along with the costumes create a real sense of authenticity. First Man is a technical masterpiece and worth seeing in IMAX for the moon sequences alone.

The acting is really well done as well, with each actor bringing so much life and passion to their respective role. Ryan Gosling and Claire Foy shine as Neil and Janet Armstrong respectively. Early in the film, the two suffer a horrible tragedy that I won’t spoil, but it affects the character’s actions greatly. Neil is distant and sees the moon as his way to move on, but his cold demeanor isolates his wife and children.

Gosling has perfected showing emotion without speaking and it really shows here. He conveys Neil’s sadness, anger, and determination without saying much of anything. However, his stoic persona can be too distant at times; not allowing the audience to sympathize with him or his plight. Claire Foy provides another home run performance as Janet Armstrong. She brings so much passion to the astronaut’s wife archetype with her no-nonsense attitude and subdued emotions. One particular scene sees Janet and Neil having to explain to their children that Neil might not return home; Gosling and Foy’s performances make this the most heartwrenching scene in the movie. At least until the final scene. Chazelle can craft endings better than almost anyone, and First Man is no exception. It ends at a perfect and heartwarming moment.

While it overstays its welcome a tad, First Man is an enthralling biopic worth seeing on the big screen.

⭐️⭐️⭐️⭐️/5
The Old Man and The Gun
Robert Redford is one of the most famous actors in American history; from Butch Cassidy and The Sundance Kid to All the Presidents Men Redford’s career is expansive and defined. His charm has been on display for years, and his newest film put that charm to good use.

The Old Man and The Gun is the mostly true story of Forrest Tucker (Redford), a career criminal who loves what he does. The film opens on Tucker calmly waltzing into a bank and up to the teller. With a smile on his face and a twinkle in his eye, Tucker shows his piece and politely tells the teller to fill his bag full of cash. After strolling out and cleverly evading the police Tucker meets Jewel, a kind-hearted rancher who immediately steals Forrest’s heart.

Sissy Spacek stars alongside Redford as Jewel, and these two are magic together. The movie is at its best whenever these two are together; their dialogue is perfectly written and their chemistry is undeniable.

As Forrest’s heists get bigger, he gets the attention of John Hunt; a recently turned 40 detective whos determined to slap cuffs on Forrest and his “Over the Hill Gang”. Their game of cat and mouse begins, but it’s more a game of tortoise and slightly older tortoise. Each man wants to best the other, but neither want the chase to end; they love what they do too much. That sentiment is the driving force behind The Old Man and The Gun. The film doesn’t have political messages or hidden symbolism; it’s just a highly entertaining film about a man who has found what he loves and does what he loves even to the detriment of those around him.

Talented director David Lowery brings this whimsical blast from the past caper alive. The gloriously grainy 16mm film gives the visuals a nostalgic look and the accompanying score is wonderful. The tight script and fast pacing make The Old Man and The Gun an easy and entertaining watch that I highly recommend.

⭐️⭐️⭐️⭐️/5
Beautiful Boy
Beautiful Boy is based on the memoirs written by David and Nic Sheff. The story follows David (Steve Carell) and his families attempts to help Nic (Timothee Chalamet) overcome his drug addiction. This movie is depressing, sad, and uncomfortable, but portrays its subject matter honestly. Director Felix Van Groeningen pulls no punches when showing Nic’s addiction. Timothee Chalamet gives an amazing performance as Nic; he makes this kid extremely likable and the audiences dread his inevitable relapses. He represents a drug user honestly and brings emotional nuance to the character. Steve Carell is fantastic as well; he brings a lot of emotion and depth to a character who loves his son more than anything. He completely transforms into this character (except for one scene where it sounds like he is declaring bankruptcy). The supporting cast is given much to do, and unfortunately, don’t leave a big impact on the overall film.

The script is a mixed bag. Much of the dialogue is genuine and well written, but it is poorly structured and has pacing issues. The repetitive nature of the film highlights the cycle that drug users fall into, but even if it was intentional, it still hinders the film.  The music is quite bad as well; it is overbearing, inconsistent, and ruins multiple scenes.

Beautiful Boy is a difficult film to watch because of its portrayal of its dark subject matter, but the two lead actors provide emotional powerhouse performances.

I can’t decide on a score/5