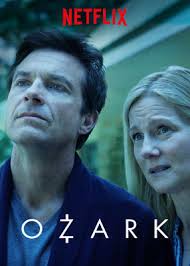 Ozarks is a Netflix Original crime drama television series that takes place in the 21st century.  The first season of Ozarks is about a man named Marty Byrde (Jason Bateman) who brings his family to the Ozarks to launder drug money.  Marty made a deal with the cartel that he would launder money through different businesses.

I really enjoyed this television show from the great acting to the cool scenery.  Jason Bateman did a great job directing the series while he also was the main actor in it.  The characters did an amazing job showing their emotions during this series.  Their facial expressions and the way the tone in their voice changes is just great acting.  Jason directed this series in the Ozarks, Missouri and the scenery of the woods and the lake was phenomenal.