Glass: A disappointing end to a Trilogy 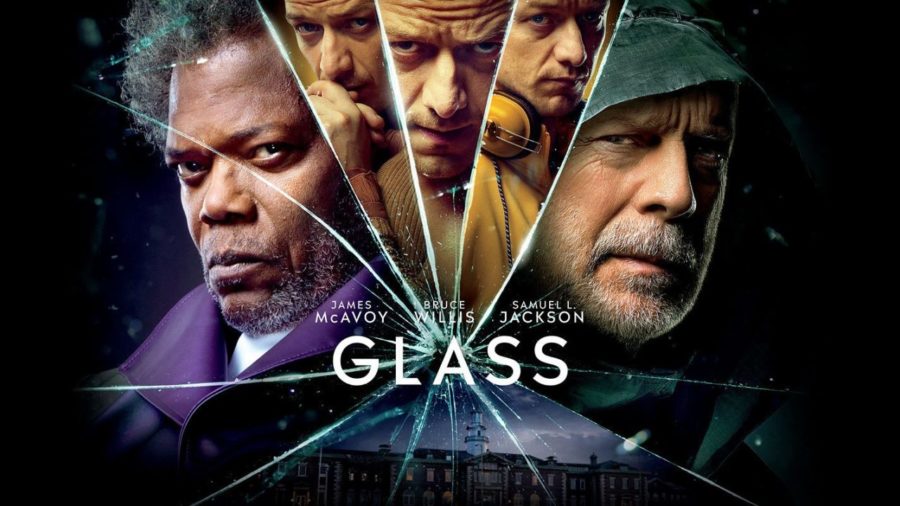 Glass is the third movie in the trilogy by M. Night Shyamalan. It is about a former security guard(Bruce Willis) named David Dunn who learned he has super powers and wants to find the man who is called “The Horde”(James McAvoy) because of his multiple personalities. After tracking this monster to a warehouse, the two of them are captured and sent to a mental institution where David encounters his arch nemesis, Mr. Glass(Samuel L. Jackson). A therapist (Sarah Paulson) then talks to these patients about how their are delusional and do not actually have super powers. This causes these characters to question their humanity and who they really are.

First off, if you haven’t seen the other movies, Unbreakable and Split, then I would not suggest going to see this movie because, even though you may have a loose grasp of the story, you would not fully understand the backstory, which in my opinion would make this movie pretty boring and confusing. That being said, I thought that the movie had some very strong points, mostly from the interactions of the characters in the hospital and I thought the plot point of the “superheroes” questioning whether they are truly powerful was really interesting. The acting was really good also, Sam Jackson plays a really good mastermind and James McAvoy is incredibly talented with the way he captures the 24 personalities living inside of him and Bruce Willis was pretty good as well. The supporting characters were also very well acted and it was cool to see all of the returning characters back. The reason I thought this movie was disappointing though was because the end of the movie ruined the whole film for me. M. Night Shymalan is notorious for his plot twists and while some of them are incredible (like the ones from Unbreakable and The Sixth Sense), these kind of felt rushed and crammed in during the last 10-15 minutes. And when there are multiple twists in this short period of time, it makes it hard to really care for them or have any of them land like the ones in previous movies.

If you have seen Unbreakable and Split and enjoyed those movies, then I suggest going to see Glass because it was fun to see the characters returning, but if you have not seen them or didn’t like the previous movies then I wouldn’t rush out to see it.