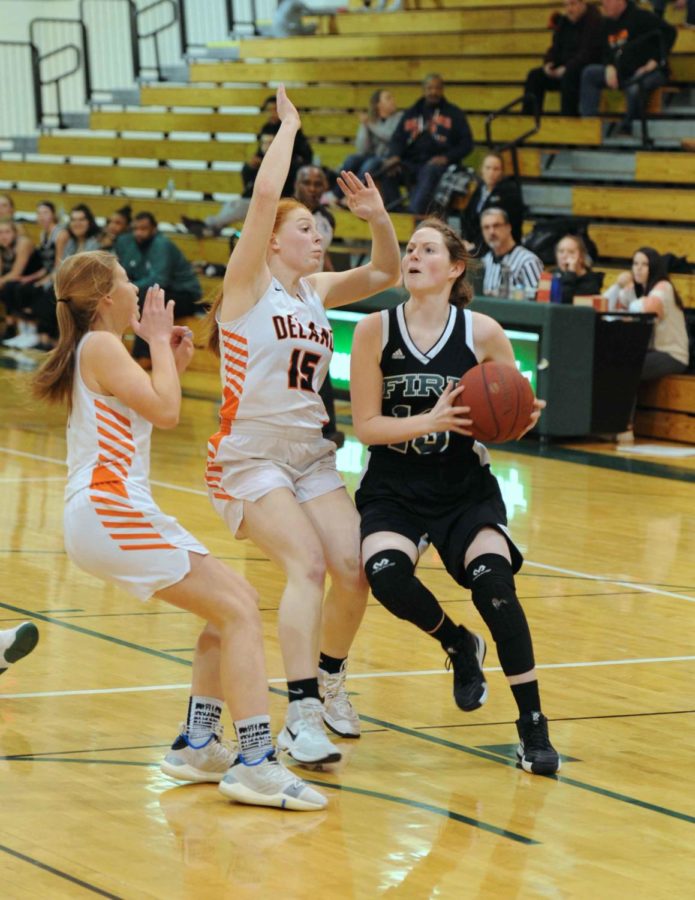 Holy Family girls basketball wrapped up their regular season this past Thursday.  The Fire suffered a heart-breaking 55-58 loss at the buzzer against Waconia.  The Fire earned a share of the Wright County Conference title and finished the regular season with a 20-5 record.  The Fire are ranked number 5 in class 2A.  Senior Anna Vakulskas was thrilled to have been able to take home a conference title stating, “To me, conference is all about creating fun rivalries and testing our abilities by playing against some bigger programs.  So, winning a conference title just validates that our team should strive for big things in these upcoming post-season games, and it makes me excited for what is to come for us.”

The Fire’s losses have prepared them for the fierce competition they will face come sections.  The Fire’s only losses have come against class 3A schools including number 3 ranked Hill-Murray, number 7 ranked DeLaSalle, Hutchinson, New Prague, and Waconia.  Senior captain Julia Geurs believes that the Fire’s losses will only make them better come sections saying, “Winning is great but it’s good to experience loss during the season too.  It helps us to work on the mistakes we’ve made and figure out how to get better on those mistakes!”

Make no mistake, the Fire’s future is bright.  The Fire are 10-0 against section opponents this year, which helped the Fire secure the number one seed in section 5AA, thereby giving them a first-round bye.  Senior captain Leigh Steiner is excited about what’s to come saying, “I’m extremely confident about how the team is playing headed into sections and I think getting the first seed has made us the team to watch in sections, so we will have to make sure to take it game by game and just keep playing the way we have, which is fast and confident!  As of right now, I think the entire team including myself is just focusing on getting to the section championship, but state is a definite possibility this year given our talent and drive as a team!”  Senior captain Grace Conroy added, “I’m very excited for sections.  We have a very strong team this year, and I’m excited to see how far our team could go.  I think the experience [of being to sections] the past two years helps because it’s taught me that all you can do each game is play your hardest.”

The Fire’s first section game will come against the winner of Blake and Southwest Christian on March 2 at St. Michael-Albertville High School.