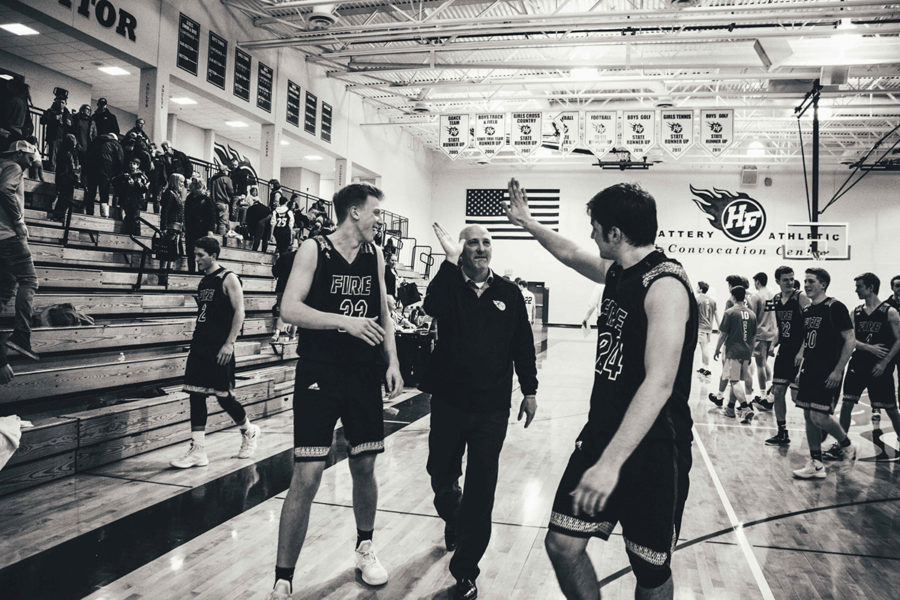 I am writing this letter much too soon. Ending my competitive playing career in a game that was winnable will forever haunt me, but I refuse to let it affect how I view basketball. I grew up a baller, simple as that. I played travel ball in the Eagan basketball system and I did alright. You never made basketball entirely easy on me. You put countless hurdles in my way, but I refused to let anything get in my way. Growing up, I never played on the “A team”. I was a C & B player. In fact, my own dad considered me a C+/B- type player. My 8th grade travel year, the coach’s son came up to me and told me I was the last pick for the B team- One pick away from being on the C team. I proved my worth all through my playing career. I was one of the best players on every team I played for.

Holy Family basketball was something else. So many memories, both good and bad.

Freshman year: I got the opportunity to try-out for the JV team as a freshman with 3 of my fellow freshman. Three of us four made the JV team… I was the one that did not. So right off the bat, freshman year I am playing with a chip on my shoulder. This also resulted in a slight attitude problem that my coach, Mr. Dols can attest to.

Sophomore year: I played on JV, but I did get to suit up for varsity. It was weird though. I was the only varsity player that did not practice with the varsity. I practiced with JV while all my varsity teammates practiced up. Again, I felt a chip on my shoulder and it was another personal hurdle to overlook and just focus on playing.

Junior year: I dis not expect much. The same players were back from the previous year’s team so I didn’t expect to play. I got my opportunity in the first game of the year and earned my spot in the rotation. I had a solid Junior season playing in my role of getting rebounds, easy baskets, bringing energy, and being the HYPE MAN! I even won the award “Most Improved” and I truly felt I was deserving of that award.

Senior year: Was finally the year I got to play with all my buddies and be one of the “main guys”. I took that role and had my share of good games. My best memory was scoring 34 points in the first game of the year. A definite worst memory is scoring a whopping 0 points in a game later in the year. This year really showed how I came along as a basketball player. I went from being a C+/B- type player in 8th grade, to having a really successful season on Varsity my senior year.

The relationships I made will never be lost or forgotten. To my Head Coach, Thuli… Our relationship was a rollercoaster. You don’t know this, but freshman year I really disliked you after putting me on 9A and then sophomore year having me practice with JV. I felt I was being overlooked. Once I finally got a real opportunity to show what I can do, you saw and utilized me. Over the past few years of you being my coach, I have gained a true respect for you and you are definitely my favorite coach I have ever played for. You are a true definition of a “players coach”.

I will truly miss playing the game of basketball competitively like I have grown accustomed to my whole life. No other basketball “league” will compare. I was a “hot head” at times, but that was just the passion I played with. I will miss all the chirp exchanges with opponents, and telling refs that they made the wrong call. Most of all, I will miss playing basketball with a team I love so much. I really loved all my teammates this year and I wont ever forget how fun of a season this year was.

Basketball, we had a journey together that I will cherish for the rest of my life. I will always live by the saying, “ball is life”.