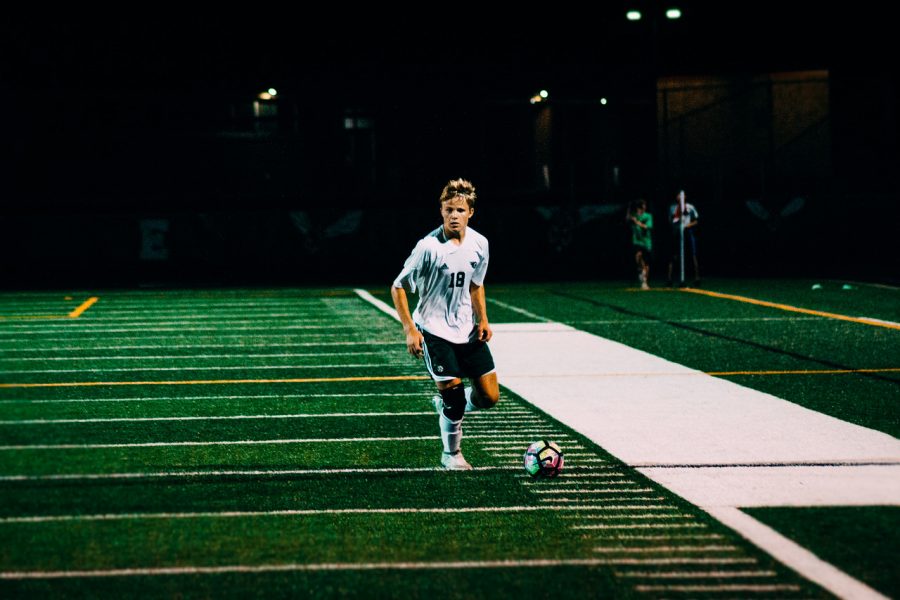 As the clocked ticked down on a chilly late October night, the Austin High School band was playing the Packers’ fight song as the game slowly ended. Junior Defender Thomas Aragon-Menzel fell to the ground in shock as the record-breaking season was over for the Fire. As the realization of the defeat came into perspective, he went to his mom, with tears in his eyes, and hugged her. “As a player and co-captain, he’s great to have on the team,” says senior forward Ben Creager. “He always gives 100% and leads by working hard.” Thomas transferred to Holy Family in the summer of 2017, coming from Minnetonka. The lefty, sidearm throwing pitcher again finished another season with a heartbreak, as the baseball team lost in the section finals. After that, he focused on the sport he played his whole life: soccer. But more specific than just a sport, a state title, is what he is seeking.

Goalkeeping- 2018 Minnesota All- State 2nd team goalie Bryce Richter is back and better than ever. As the 3rd of the 4 captains for the Boys soccer team this year, Richter suffered a terrible mouth injury in an early season scrimmage against the Minnetonka Skippers. Only 3 days after getting stitches for his bottom lip, Bryce was back on the turf in a jamboree in Edina. The backup goalie is basketball player Rory Johnson, who as a senior brings veteran leadership and good skill in net.

Defense- Playing alongside Aragon-Menzel, are 2 juniors who are new to the Defensive Position; Right back Jordan Van Eyll and center back Anthony Olson. Since veteran coach Jorge Oconitrillo has the boys play in a 3-1-4-2 formation, only 3 Defenders will play at the same time. The backups include Senior David Torborg and Juniors Sam Bradley and Sebastian Bojorquez.

Midfield- Leading the center of the field will be the 4th captain Dan Parker. He will play next to quick-footed Freshman Eric Oconitrillo. Junior Gavin Lund will start in the coveted ‘Dirty’ Position which requires both physicality, skill, speed, and positioning. Junior Dylan Krumpholtz will be backing-up Lund with steady playing time. Rounding out the midfield are 2 of the most promising Junior Midfielders in the state. Multi-sport phenom Bishop Schugel and Minnesota United Academy prospect Finn Dowling complete the best Midfield Wright County has to offer. The backup core for the Midfield include under-classmen Charlie Ficek and Kaden Dervin, along with senior utility man Jack Bucholz.

Forwards- Starting up top will be the hero in the state tournament, Ben Creager. His dribbling and creativity unmatched. Senior Casey Gess shows speed and strength also to compliment Creager’s goal scoring ability. Sophomore Ryder Ferguson provides quickness and shot’s hard for any goalie to contend with.

Holy Family Also boasts 2 very strong lower teams. JV will be looking to back up a season with only one loss. They are lead by Junior Defenders Danny Barbonio and Collin Nawrocki, as well as Sophomore Midfielders Dylan Ehlers and Austin Clifford. C-Squad contains 2 7th graders who are the future of the program, John Guillemette and Phillip Olson, along with 2nd year goalie Nick Gess.