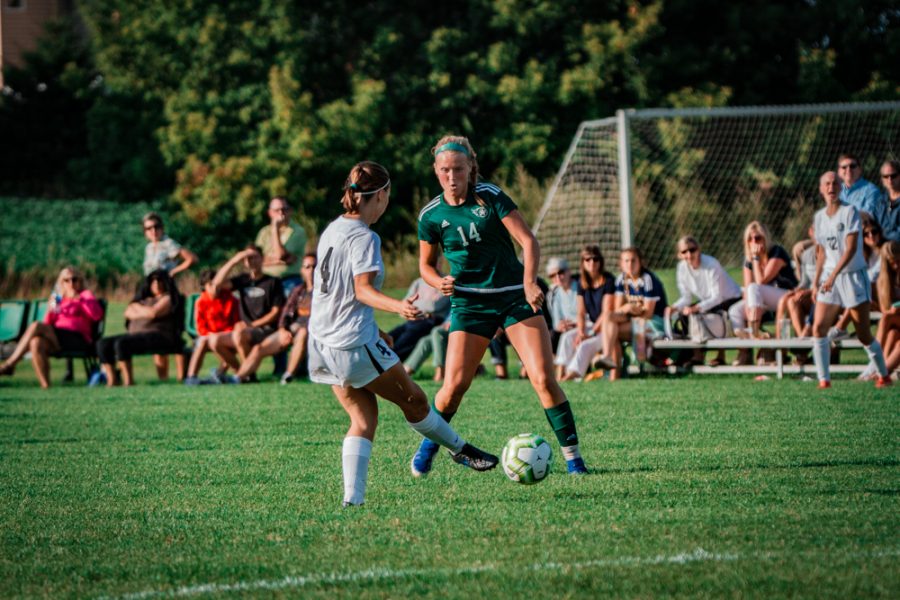 Girls Soccer- The girls soccer team just finished a 3 game week, right after winning their first 2 games in stylish fashion. Tuesday, they upset Chaska 3-1 with Maeve Kelly tallying 2 Goals. Maeve, who is a 3rd year starter as only a Sophomore, leads the Fire with pace, strength, and agility. Ella Haley grabbed the other goal. Friday, the girls were losing 2-0 at half, but changes at halftime helped Sophomore Defender Katie Anseth get a goal midway through the 2nd half. Senior Goalie Sydney Paulson put on an outstanding performance in net. Saturday they took on the Chanhassen Storm after about 16 hours of rest. The girls fell 3-0.

Volleyball- The ladies were defeated by Watertown-Mayer Thursday in 3 sets. Sophomores Sophia Mackey and Lizzie Guggemos combined for 13 kills. Mackey had only 8 errors on 27 attacks, and Guggemos had an outstanding 3 errors on 14 attacks. Senior Kathryn Jans also continued her hot streak, already putting up 67 set assists this season. Senior Kalie Dahl is currently pacing the Fire with 6 blocks.

Cross Country- Both the boys and girls distance crews raced on the 5th last week in Fridley during the annual Peach Run. The boys poured on an absolute domination taking the team win with ease by 18 points over St. Anthony Village. Juniors Pat Ricke and Jaden Lorenz, along with Seniors Tyler Franck and Ben Fink all finished within 4 seconds of each other, taking places 2-5 overall. In 16th place and the final scorer was Junior Greg Stoffel. 10th grader Matt Santini also ran notably well coming off an injury in 22nd place. Finally for the boys was an all Sophomore trio taking places 37, 38, and 39 was Cole Spoden, Aaron Hesse, and Grant Hayes. The girls team proved that quality always beats quantity. With a team so small they didn’t even have enough girls to make a full scoring squad, the 4 girls of Abbey Fink, Morgan Franck, Dani Sutcliffe, and Ava Mettler all placed in the top 21.

Football- The Fire lost game 2 of the season Friday to Dassel-Cokato. The final score of 33-0 isn’t accurate of the rather even game. The Fire fought hard but failed to put points up. The health of the team is an area of concern. In game 1 vs Mound, Junior QB Jake Kirsch and Senior Lineman Carson Liebeg were injured with apparent collarbone and head injuries. On Friday, Junior TE Thomas Guyer and Senior RB Nick Hendler both appeared sick at halftime, and failed to finish the game. Senior Nate Tinucci and Junior Carver Kasper only combined for 36 yards passing. Tinucci, Hendler, and Junior Jakob Lenzmeier ran for a solid 97 yards combined. Playing both sides of the trenches outstandingly were Senior lineman Mark Roane, Seth Thompson, and Logan Radick, along with Juniors Emiliano Corona and Will Zay. The 5 combined for 30 tackles.

Girls Tennis- In the first match of the week, both Varsity and JV lost to New Prague.  A tournament at at St. Paul Harding Saturday changed the luck. A Doubles sweep and single win for 7th grader Aria McNeely lead the Fire over Harding. In addition to that, the girls upset Rosemount 5-2. Aria McNeely continued her unbeaten season bringing home the champions medal.

Boys Soccer- After not scoring a goal in their first 2 games, the boys had an outburst Friday and Saturday, getting wins against Fargo Shanley and then stunning Eagan in an away game. Taking on Fargo, Junior phenoms Bishop Schugel and Finn Dowling combined for 4 goals and 2 assists. After having a goal called back the game before, Thomas Aragon-Menzel took charge as captain and rifled a shot into the back of the net. Power Forward Casey Gess scored of a rebound, and his Striker partner Ben Creager scored a goal and an assist. Sophomores Ryder Ferguson and Charlie Ficek got an assist a piece. Midfielders Eric Oconitrillo and Dan Parker combined for 3 assists, and Senior David Torborg finished the job vs Fargo getting a goal of a rebound. The next day, with goals from Bishop Schugel and Ben Creager, and an outstanding performance from Senior Goalie Bryce Richter, they beat Eagan 2-1.