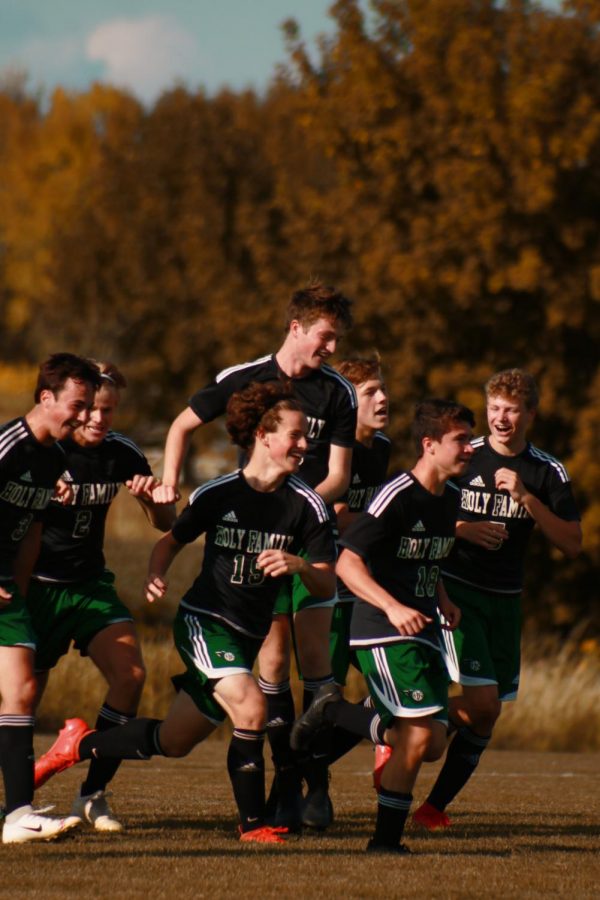 Boys Soccer- After starting off the season 0-2, the Fire boys have done something special. Not only have they gone 4-0 in the last 4 games, they have outscored the 4 teams (Fargo Shanley, Eagan, New Prague, Rockford) 18-2. The turnaround was unseen by many. Leading the scoring has been Senior Captain Ben Creager, and Junior Bishop Schugel, combining for 10 goals and 8 assists. Underclassmen Ryder Ferguson and Eric Oconitrillo have both earned starting spots, both tallying a goal in the game vs Rockford Friday. The defenders, led by Thomas-Aragon Menzel, have helped All-State Goalie Bryce Richter face little shots lately. Bryce has a .82 save % so far.

Volleyball-  With a 1 game week, the girls traveled to DeLaSalle in Minneapolis for a highly contested battle. Senior Abby Smith had a tremendous outing, putting up 13 kills and only 10 errors in 48 attempts. Smith also had 21 defenses, with 58 now on the season. Sophomore duo Sophia Mackey and Tatum Hussey combined for 15 kills, 4 aces, and 26 defenses. Senior Kathryn Jans had 31 assists vs the Islanders, getting her total up to 98 on the season. The winless team will try to break the ice with 3 games this week.

Football- Taking on yet another top 10 team in the state, the Fire have lost 3 straight now. Starting the season as a wide receiver, Senior Captain Nate Tinucci had an impressive 86.9 QBR Friday @ Annandale. Tinucci found Senior Chris Bauer and Junior Jakob Lenzemeier 1 time each, with gains of 36 and 37 yards, respectively. Lenzemeier’s catch was brought into the end zone for a touchdown. Arguably the best game so far, the Fire fell only 12-26, with Tinucci running into the end zone for the 2nd touchdown. The linebacker core of Mark Roane, Joshua Adams, Lucas Lembke, Will Say, and Thomas Guyer, combined for 26 tackles. Chris Bauer, playing Cornerback on defense, grabbed his 2nd Interception of the season. Sophomore Defensive Lineman Jack Barth and Joe Dahlin grabbed 6 tackles each, helping Seniors Mitch Prosser, Seth Thompson, and Logan Radick.

Girls Soccer- With their 2nd 3 game week in a row, the girls soccer squad has surprised many. Taking down New Prague Tuesday, Maeve Kelly and Ella Haley got a goal each in the 2-1 victory. Friday night, vs Rockford, the fire dominated possession. Kelly, yet again, got more goals, scoring her 5th, 6th, and 7th goal to complete the hat-trick and dominating performance over the Rockets 3-0. 14 hours later, the girls were back on the field in Eastview. the Defensive 4 of Senior Captain Maggie Rothstein, Sophomores Kenzie Pavelka and Katie Anseth, and Freshman Janielle Stanoch, along with Senior Goalkeeper Sydney Paulsen held strong for the first 70 minutes, but let in 3 in the final 10.

Girls Tennis- The ladies finished the 2 match week 1-1. Tuesday, they lost 1-6, with only Claire Haley winning in the singles 3 position. Friday vs Roseau, the girls crushed the Rams 5-2. Junior star Ally Agerland won convincingly, along with Cecily Cronin, Haley again, and Aria McNeely, sweeping all 4 singles. Sophomore Cassie Beddor and Freshman Emma Murphy took the win in the doubles 3 spot.