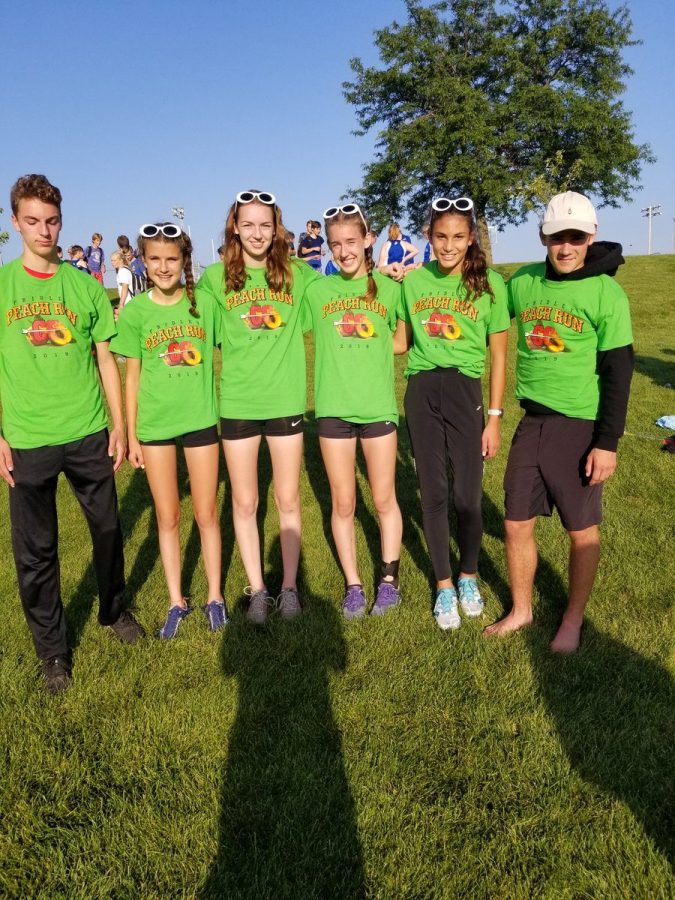 The Holy Family cross country team tackled their second meet of the year on Thursday, September 5 at Fridley High School.  This meet marks the last two mile meet the Fire will run this season.  The Fire used this meet as a “tune up” meet to prepare for the standard 5k meets they will compete in the rest of the season. Every runner posted personal or seasonal best two mile times.

While pre-meet projections had the Fire boys cross country seeded second, the Fire proved once again not to underestimate them.  Based on their strong performance, the team solidified themselves as a strong contender to vie for a spot in the State Meet.

Stepping onto the course at Commons Park, the Fire not only proved projections wrong, but also repeated as Fridley Peach Run champions for the second year in a row.  The squad defeated many quality teams that were over twice their size. The Fire built upon their strong performances from the first two mile of the season, with four runners finishing in the top five, defeating runner-up Spring Lake Park by a score of 35-66.

Leading the way was junior Patrick Ricke, who returned after missing the first meet of the season to pace the Fire with a second place finish in 10 minutes, 54 seconds. On the heels of Ricke, was senior co-captain Ben Fink, sophomore Jaden Lorenz, and senior co-captain Tyler Franck. Fink ran a personal best two mile time of 10:55, almost 50 seconds better than his two mile time last season. Close behind was Lorenz, who also ran a personal best clocking in at 10:58.4, while Franck also bested his two mile personal best time, coming in at 10:58.7 to complete a second through fifth place sweep.  Junior Greg Stoffel, who improved 47 seconds from last season’s time, came in at 11:43.70. Stoffel finished in the top 20 and rounded out the Fire’s scoring team.

This meet is the source of much optimism for the Fire’s boys cross country team this season. If the Fire continue their pack running up front and continue to see steady improvements from Stoffel, the team’s fifth runner, the Fire will continue to be competitive at every meet during the year.  Head Coach Ron Hoffman points to the fifth runner as being the key factor for the Fire to make a run at the State Meet this season.

The Holy Family girls cross country team also performed well. The Fire were short a runner, but still managed to rack up four top-10 performances in each of their respective races. Leading the way in the freshman through sophomore race was freshman Ava Mettler, who ran a personal best two mile of 13 minutes, 40.8 seconds. Eighth grader Morgan Franck was close behind with her new personal best of 14:01.2. Freshman Danielle Sutcliffe rounded out the Fire team effort by dropping almost a full minute off of her previous two mile race to finish in 14:32.3. Meanwhile, in the junior through senior race, senior captain Abbey Fink came in tenth place.