Due to the signing of the PACT Act by President Trump, 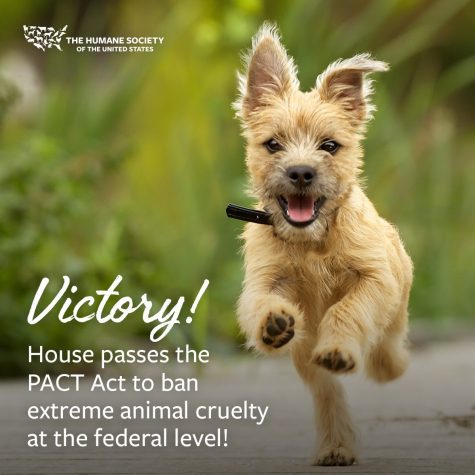 domestic animal abuse is now a felony. This occurred on Monday, November 25 after the bill was passed through Congress. “The Preventing Animal Cruelty and Torture Act, or PACT Act, bans abusive behavior including crushing, burning, drowning, suffocating, impaling and other bodily injury toward any non-human mammals, birds, reptiles or amphibians” (O’Kane). This relevant to modern day society as animals are meant to be in our care, rather than left to the expense of people.

Animals have always been a huge part of my life and I believe that they deserve as much protection and respect as any person. This is a great step forward for the treatment of animals and I hope that further laws can be passed to allow for protection of not only household pets, but also for farm and wild animals. The PACT Act provides protection and federal fines and punishments for the abuse of domesticated animals, but I believe that animals such as livestock and wild animals, deserve the same protection. In the future I believe that our generation should work towards such laws and better our world.