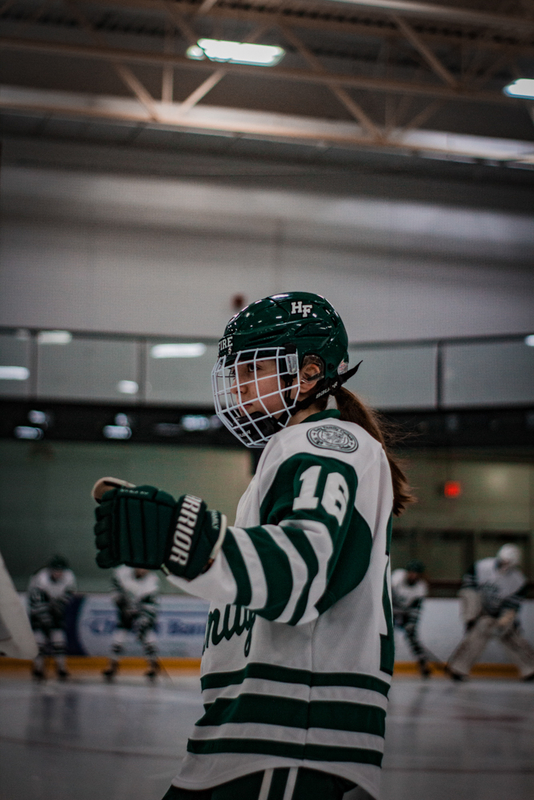 Last week, the Fire girls hockey team participated in the most talented and rigourous holiday tournament in the state: The Herbs Brooks Holiday Classic. With the Fire coming in ranked #8 in the state, the fellow teams included #1 Andover, #3 Blake, #5 Hill-Murray, #24 Centennial, #25 Rogers, along with smaller powerhouse teams in St. Paul United and Procter-Hermantown. The opening round matchup was against the best team in the state, Andover. Coming in undefeated, Andover had 8 Division 1 commits, creating a high school team with the talent of some college teams. Andover showed their raw skill defeating the Fire 5-1. However, the score does not do justice to the equality of the game, as Andover only had 6 more shots then the Fire. The girls moved on to the next day to play the 3rd best team in the state: Blake. The banged up Blake team, coming off of an upset loss from Rogers, created a game that could be seen again in the state tournament. Only 2 minutes into the game, Freshman Grayson Limke fired a shot into the back of the net, with Cecily Cronin doing the same 4 minutes later. Blake finished the period with a goal from Minnesota commit Addie Burton. The Fire continued to beat Blake in everyway possible, stomping on a team that many think can win state, winning by a score of 5-1. Going into the consolation championship game, the Fire saw a familiar opponent in Hill-Murray. Losing to them 2-3 earlier in the season, the girls were determined to pul off a win. They did just that, as Caitlin Rock and Taylor Koeppl burried goals, backed up by a shutout performance by junior Jillian Oncay, winning the game 2-0.

Looking forward, as this is only the 2nd season of HF girls hockey, a state tournament run is looking like a serious outcome. In the new ranking, the girls are ranked outstandingly 4th in the state, behind Edina, Andover, and Minnetonka. With only 2 weeks left in the season, the Fire will get shots at fellow top 10 teams Centennial and Maple Grove, along with a very strong Benilde-St. Margarets team. The top 9 forwards consisting of freshman Taylor Koeppl and Grayson Limke, sophomores Libby Kamp, Kayla Woytcke, and Kenzie Moss, with seniors Caitlin Rock, Lauren Hickey, Sydney Paulsen, and Cecily Cronin have combined for over 100 points this season, and the defensive core of sophomores Maeve Kelly and Maddie Morgan, along with freshman Olivia Paidosh and Justina Valentini have helped goaltenders Sedona Blair and Jillian Oncay combine for an incredible average of 1.25 goals against per game. From statistics all the way to raw skill, this team is among the best in the state, and this could be the season that they go all the way.