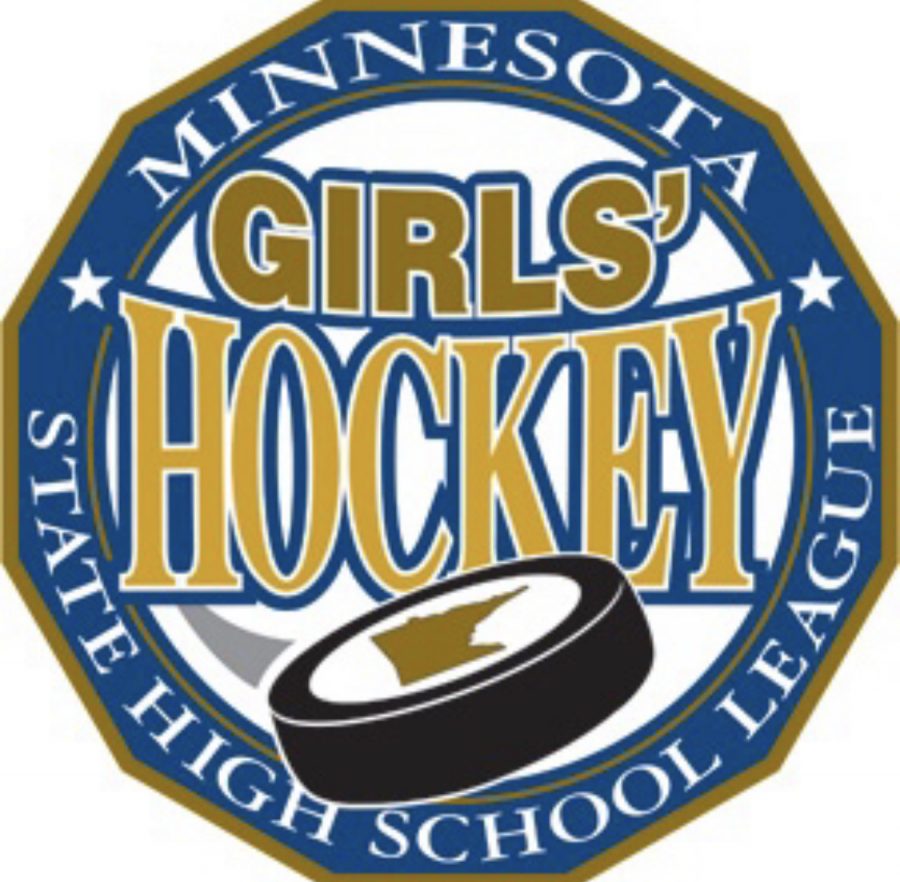 The MSHSL girls hockey state tournament takes place at the Xcel Energy Center every year. This year, which will be the 26th edition, boasts 2 classes, AA, which includes the bigger schools, and A, which has the smaller schools. For each class, there are 8 sections, with each section hosting a single elimination tournament for the 6-8 teams in each section, with the winner moving onto the state tourney. The best of the best will play each other this February, fighting for the mighty Eveleth Trophy.
1A
The team coming out of section 1A will almost certainly be either Rochester Lourdes or Faribault. Led by seniors Sarah Davis, committed to Lindenwood, and Emma Schmitz, committed to Sacred Heart, Lourdes will be a force to reckon with. They showed this by crushing Faribault 4-0 earlier in January. Faribault has been almost single handily carried by Brown commit Olivia Williamson. Williamson has put up 59 points this season, good enough for 6th in the state. She will have to put up those same numbers against Lourdes to have any chance against the Eagles. In the end, the first forward line for Lourdes is gonna be to much to handle for Faribault goalie Mikayla Bohner.

Winner- Rochester Lourdes Eagles
2A
Unlike 1A, 2A will be much more open. Finishing 4th in state last year, Mound Westonka lost some firepower in the offseason, along with solid goaltending. However, Vermont commit Brooke Pioske has captained her team to another state championship threatening season. Fellow Wright County Conference teams Hutchinson, Litchfield, and Delano/Rockford have had their moments this season, and could cause drama in the section tourney. Delano’s Goalie Grace Glasrud, committed to Aurora, has made it clear she is one of the best goalies in the state. So has Litchfield Goalie, in Junior Avery Stilwell. Goaltending is what Mound lacks, giving Hutchinson a high chance to make it to state, as they are the only true all-around team in this section.

Winner- Hutchinson Tigers
3A
In my opinion, 3A is the only section in which every one of the 7 teams can win. Luverne will be the favorites, currently sitting at an outstanding 17-3-1 record. Marshall, Mankato West and Mankato East roster solid scoring, with Worthington, Fairmont, and Windom having solid defense. Molly Grundhoffer of West has 33 points this season, and has D1 potential because of her 2-way style of play. The rest of the teams lack a player like this, which gives my vote to West to take the section over Luverne.

Winner- Mankato West Scarlet
4A
4A should easily be won by South St. Paul. Ranked 3rd in the state, the South St. Paul team is extremely balanced, with 7 girls in double digit points. Sophomore Mankato State commit Lilie Ramirez has had 8 multi point games, leading the Packers. St. Paul United and Sibley should put up a mild fight, but in the end, South has advantages in every possession.

Winner- South St. Paul Packers
5A
Although in A, Breck is thought of by many as the best team in the state, and proved this with a win over AA #1 Andover 5-4 a couple weeks ago. Breck heralds 4 Minnesota commits in defensemen Elly Klepinger and Emily Zumwinkle, and the infamous Lindsay sisters, who seem to always make an impact. If thats not enough, Ms. Hockey frontrunners Ally Qualley and Olivia Mobley have combined for 123 points, which is almost impossible in this day and age. Orono and Chisago Lakes are both teams that could make it to state in almost any other sections, but unfortunately, they have Breck. Breck has beaten both teams this season, outscoring them 19-4.

Winner- Breck Mustangs
6A
The section including teams from western Minnesota is gonna be interesting to see unfold. River Lakes and Northern Lakes have had shaky seasons, but have had moments where they have shined. Willmar is another team that we could see make it to state, but goaltending has been a problem, as Bryton Carlson and Halle Mortensen have combined for a disappointing .883 save %, allowing almost 4 goals in per game. Willmar crushed Northern Lakes 2 weeks ago 7-3, and lost in a close contested match against River Lakes in December. The only problem with River Lakes is the depth they lack at forward, as the defense scores a unorthodox amount of their teams points. If Willmar can figure out their goaltending, make sure to look for the Cardinals to be in St. Paul come February.

Winner- Willmar Cardinals
7A
Powerhouse co-op of Cloquet-Esko-Carlton has had a tremendous season, with only 3 losses so far, and big wins against Grand Rapids/Greenway (twice) and Champlin Park. Procter/Hermantown has also played extremely well, floating around .750 win %. The 2 teams are bound to meet again in the section finals, as they have split the season series, with C-E-C winning the first game, and P/H winning the second. Bemidji state commit for C-E-C, Taylor Nelson, has had a historic year, passing 50 points already, with over 30 goals. P/H’s sophomore goalie Abby Pajari has stood on her head this season for the Mirage, and I think she will continue to do so in sections.

Winner- Procter/Hermantown Mirage
8A
#2 ranked Warroad will no doubt win this section. They have demolished every team in their section this season, and reign one of the best forward lines in all of girls hockey, including Hannah Corneliusen, and Geno and Talya Hendrickson. The trio has combined for 182 points, which is video game like numbers. Placing 2nd to Breck in the past 2 state championships, the Warriors are fully loaded and ready to fire this offseason.

Winner- Warroad Warriors
A State Championship
The single A state championship is bound to be the 3rd final straight between Breck and Warroad. You can never count out South St. Paul or Procter/Hermantown, but Breck and Warroad have been simply untouchable this season. The state championship will come down to the 6 D1 commits of Breck, vs a physical and determined team in Warroad. Warroad Goalie CJ Lanctot had been incredible this season, but in the end, Warroads defense will not have enough depth to beat Mobley & Co.

1AA
Farmington and Lakeville South are destined to obliterate this section, but in different ways. Farmington is a team with loads of talent. Claire Enright is committed to Minnesota, Jayden Seifert is committed to Mankato State, and Brenna Furhman is committed to Minnesota-Duluth, along with just winning the world championship with the USA U-18 team. However, they are underperforming, as their record is sitting at just 14-9, with embarrassing losses against Eastview and Eagan. Lakeville South however, is a young team who has acceded expectations. Lead by underclassmen Taylor Otremba and Ryann Wright, the Cougars beat Farmington earlier in the season. I believe that Farmington will come out of this section battered up, but still alive.

Winner- Farmington Tigers
2AA
The 2nd hardest section in the state includes our own Holy Family, as well as fellow top 10 ranked teams Eden Prairie and Minnetonka. Chaska/Chan and Shakopee also have dangerous teams. EP lacks depth at defense, as St. Anselm commit Claire Kuipers is the only real defensive threat for the Eagles. Minnetonka has incredible defensemen, including members of Team USA Rory Guilday and Maggie Nicholson, as well as one of the best goalie in the state in Brynn Dulac, but lack in forward depth, besides Boston commit Lacey Martin. Although Holy Family is without commits, they are the most complete team, with depth at all 3 positions.

Winner- Holy Family Fire
3AA
Apple Valley is the favorite to win this section, as the top 20 team is having one of the best seasons in recent history. Eastview will give the Eagles a run for their money, as they defeated them earlier this season. Apple Valley has improved immensely since their December matchup. Burnsville and Rosemount have been extremely inconsistent, but could potentially pop out during the section tournament. Look for Rosemount’s Whitney Tuttle to put up high number this postseason. The only team that has been consistent is Apple Valley, so that is why I’m giving them the nod.

Winner- Apple Valley Eagles
4AA
D1 commit Nina Steigauf and Allie Franco are in charge of Hill-Murray, and have proven over and over again they are a serious state contender. The Pioneers have crushed every team in this section throughout the season and are favorited to do so again. A revamped Stillwater team could wedge their way into the state tourney, but the odds are stacked against them.

Winner- Hill-Murray Pioneers
5AA
5AA will be a interesting section to watch this February. Maple Grove is stacked with college talent, including captain Tristan Tatur. Centennial is a fairly balanced team, and Blaine and Rogers have both pulled off extreme upsets this year. Maple Grove may overlook this section and the talent that is in the section, and Sophomore Paige Vreeman of Rogers will be ready to pounce. I believe that she, along with senior Allison Hatcher, will upset the rest and clinch a spot at state.

Winner-Rogers Royals
6AA
This section has 4 different teams that are serious state championship contenders. #2 ranked Edina has 8 D1 commits, including Princeton commit and a top 3 goalie in the state, Uma Corniea. Blake also has 6 commits, with Team USA star Audrey Wethington at the helm. Benilde-St. Margarets has the most stacked defense in the state, as their 4 blue-liners have combined for 68 points. Finally, Wayzata has had a rollercoaster season, but wins against BSM and Minnetonka are impressive. In the end, Edina has overwhelming talent, with one of the best coaches in the state. The Hornets have no excuse to not move on.

Winner- Edina Hornets
7AA
There is no doubt in my mind that Andover will win this section. With only 1 loss on the season, the Huskies have a team that could beat most college teams, with Team USA player Peyton Hemp leading the charge, along with senior Jamie Nelson. Together, they have combined for 97 points. The 2 D1 commits are joined by power forward Maddie Kaiser, quick junior Gabby Krause, and underclassmen that are extremely impressive. North Wright County and Forest Lake have loads of skill, but nothing that will compare to the Huskies.

Winner- Andover Huskies
8AA
Like 7AA,  Brainerd is the clear frontrunner. Seniors Sophie Robinson and Gabbie Smith have had incredible high school careers, and this year is no exception. St. Cloud and Sauk Rapids/Sartell could potentially pull an upset, but I don’t see that happening. The Warriors have have a huge win over Blake and a tie with Warroad, and I believe that is just an omen to what this team will do this postseason.

Winner- Brainerd Warriors
AA State Championship
Mark my words, this will be the greatest state tournament in history. All 8 teams have college skill all over, and will be ready to showcase. Apple Valley, Rogers, and Brainerd will most likely go down early, and Farmington shortly thereafter. In the 3rd place game, Holy Family will be looking to defeat Hill Murray, as both teams have won against each other once this year. I’m predicting a final including 16 D1 commits combined, which means of course, Andover vs Edina. In the opening game of the season, Andover won 1-0 in a game in which  you couldn’t blink. I think Andover will do this again, but with much more goals scored. Truly though, anything can happen, as this is February Madness.